Would you like to switch to the accessible version of this site?

Don't need the accessible version of this site?

Dr. Bill Kuhfus received his veterinary degree in 1973 from Iowa State University. He practiced at an animal hospital in Oswego, Illinois from 1973 until 1984, when he joined Dixon Veterinary Hospital. Dr. Bill has been on the board of a local animal shelter and is a member of the American Dental Society. He has a special interest in dentistry. Dr. Kuhfus and his wife, Nancy have 3 children. He enjoys family activities, reading and is an avid tennis player.

Dr. Phil Fassler was born and raised in Sterling Illinois. He received his veterinary degree from the University of Illinois in 1989 and his masters degree in Parasitology shortly after that. His work was with the safety of Ivermectin as a heartworm preventative in the sensitive collie breed. He first practiced at the Noyes Animal Hospital in Barrington, Illinois before joining our practice in 1991.

Dr. Phil enjoys the challenge of difficult medical cases and working with the pet owners to assure they are deeply involved in their pets care and understand the choices involved. Surgery is a special interest and he is one of our hospitals orthopedic surgeons and especially enjoys the challenge of surgical treatment of cancers that can effect the pets in our practice.

Dr. Nathan McClain grew up in Dixon, Illinois and graduated from Dixon High School. He earned a Bachelor of Science degree in biology from the University of Illinois Champaign-Urbana in 2000, then went on to receive his Doctor of Veterinary Medicine degree from the University of Illinois in 2004. Dr. McClain joined the staff at Dixon Veterinary Hospital in 2004. He is an avid outdoorsman and enjoys hiking, fishing and boating on the Rock River. He is excited to once again see old friends and make new ones as he becomes active in the community he grew up in.

Dr. Chris Gunnon was born and raised in Dixon, IL. He served in the US Navy from 1989-1993 and Graduated from the University of Illinois in 2002 with a Doctorate in Veterinary Medicine. Dr Gunnon currently sits on the Board of Directors, and is the acting treasurer for the Northern Illinois Veterinary Medical Association. He practiced both large and small animal medicine in Princeton, IL before moving back to Dixon with his wife and three children. He enjoys practicing small animal medicine and has a special interest in surgery and orthopedics.

Dr. Erin Graves was born and raised on a small farm in Belvidere, Illinois. She served as an officer in the U. S. Army Veterinary Corps in Corpus Christi, Texas, and graduated from the University of Illinois in 2004 with a Doctorate in Veterinary Medicine and a Masters Degree in Science. Dr. Erin is married with 2 children and lives in Sterling. She enjoys small animal medicine and has a special interest in dentistry. Dr. Graves is excited to be home in Illinois in private practice and looks forward to serving the people and pets of the Sauk Valley area.

Dr. Trisha Cooper was born and raised in Chillicothe, Illinois. She earned a Bachelor of Science degree in biology from Bradley University in 2009, and her Doctorate in Veterinary Medicine from the University of Illinois in 2014. She practiced mixed animal medicine at a practice in Effingham, Illinois for one year before moving to Dixon to join the staff at River Ridge Animal Hospital in 2015. She enjoys the everyday challenge of small animal medicine and strives to provide the highest quality of care to her patients.

In her free time, she is fascinated with do-it-yourself projects, and has built some of the furniture and home decor in her house. When she is not dabbling in carpentry, she enjoys the outdoors, especially boating, fishing, hiking and running, and hopes to participate in triathlons in the future. She shares her house with Jaxx the husky, Scarlett the pitbull, Saddie the yorkie, and Emmersyn the cat. 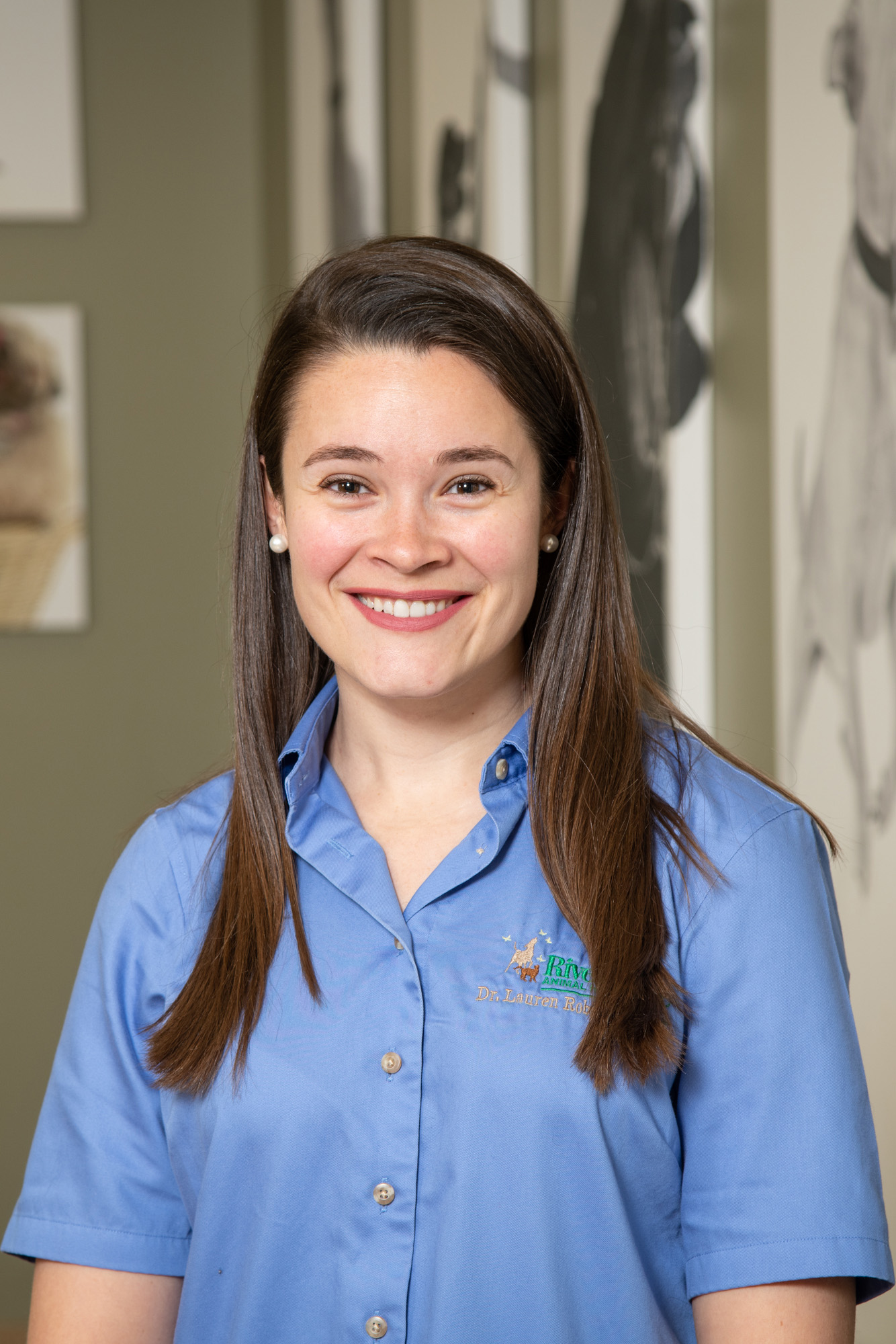 Dr. Lauren Robinson was born and raised in Cedar Rapids, Iowa. She earned a Bachelor of Science degree in Animal Science form Iowa State University in 2012. She continued her education at Iowa State and received her Doctor of Veterinary Medicine degree in 2016. She practice for 2 years at a small animal practice in Moline before joining the team at River Ridge Animal Hospital. She enjoys working with small animals and is interested in preventive care and ultrasound. Dr. Robinson enjoys spending time outdoors whenever she can, including hiking, camping, fishing, and tennis. She spends the rest of her time at home relaxing with her husband and her dog.

Dr. Justin Hohlen was raised in Dixon, Illinois. After graduating from Dixon High School, he attended Iowa State University and graduated with a Bachelor of Science degree in animal ecology in 2017. Dr. Hohlen received his Doctorate in Veterinary Medicine from the University of Illinois in 2021. He joined the staff of River Ridge Animal Hospital in 2021. Dr. Hohlen wants to help the pets of the Sauk Valley area live their best lives. He has interests in exotic companion animals, orthopedics, and companion animal reproduction.
Dr. Hohlen lives in Dixon with his wife and their Great Pyrenees dogs. When not at work, he enjoys gardening, hiking, cooking, and working on automotive projects.

Find us on the map

Read What Our Clients Say

February Newsletter: Where to Start When Training Your Puppy

Is your puppy ready to be trained? ...

February Newsletter: Weird Things Your Cat Does and What They Mean

Looking for an explanation for your cat's strange behaviors? ...

Got any plans for National Bird Day? ...

January Newsletter: Don't Forget to Vaccinate Your Pets this Year

Are your pets ready for winter weather? ...

December Newsletter: Pets and the Holidays: What to Know before Feeding Your Pet Table Scraps

Could holiday table scraps cause health woes for your pets? ...

November Newsletter: How arthritis can affect your pet

Could your pet have arthritis? ...

Looking for ways to support your local animal shelter? ...

Wondering if microchipping is right for your pet? ...

Could bad breath mean that your pet has a dental issue? ...